A sling alone isn’t always enough to safely move a load.  Heavy or unbalanced lifts sometimes require more stability or capacity than a sling hitch can give. This is when riggers turn to below-the-hook lifting devices like lifting beams and spreader beams.

Beams increase the safety and efficiency of lifts where the size, shape, or weight of the load requires extra stability. They keep the load level with the ground, which helps prevent damage to the load and extends the service life of slings by reducing the chance of slings sliding off the load.

What below-the-hook device is best for my lift?

Standard and custom lifting devices are available for a wide variety of applications: some standard options are pipe hooks, C-hooks, coil lifters, pallet lifters, and beams.

Beams are used when the load requires more than one pick point for stability. When it comes to beams, there are two major below the hook devices: lifting beams and spreader beams.

Each has pros and cons that are valuable to know when deciding which is best for your particular application. The main difference between the two types of beams lies in the type of force that is put on each beam when under a load. 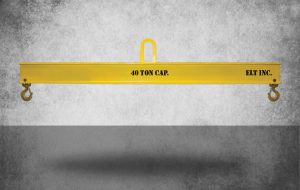 A lifting beam is a below-the-hook lifting device designed to provide additional pick points for loads where one pick point won’t suffice for load stability. They typically have a single attachment point on the top of the beam, and two or more evenly spaced pick points on the bottom to spread the lift forces throughout the beam.

Lifting beams connect directly to the hook – no top rigging is required. This makes lifting beams ideal in situations where headroom is limited.

To overcome bending forces, lifting beams usually must be larger, stronger, and heavier than spreader beams. This makes them more expensive per foot and per ton of capacity. 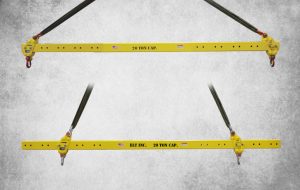 A spreader beam evenly distributes the weight of the load over two or more pick points, and is supported by two or more slings that rig the beam to the hook.

Spreader beams have two attachment points on the top side of the beam which connect at a 45-60 degree angle to the crane hook. Two or more evenly spaced lower pick points attach to rigging that hangs vertically and connects to the load being lifted.

The addition of top rigging changes the forces that are applied to a spreader beam. Because lift forces travel along the vertical bottom rigging, then move to the inward-angled top rigging, forces applied to the beam are compressive rather than bending forces.

These compressive forces are easier for the beam to withstand than the bending forces that are applied to a lifting beam. The result is that spreader beams are 3-4 times lighter and therefore cheaper than a lifting beam of the same capacity.

If you have headroom available, spreader beams have the advantage of being lighter and more cost effective than lifting beams. 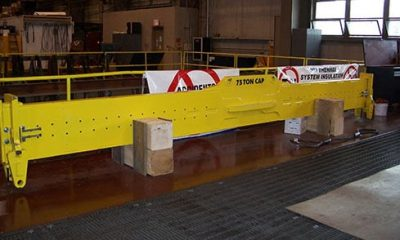 Introduction to Design for Manufacturing Gallery

Introduction to Design for Manufacturing